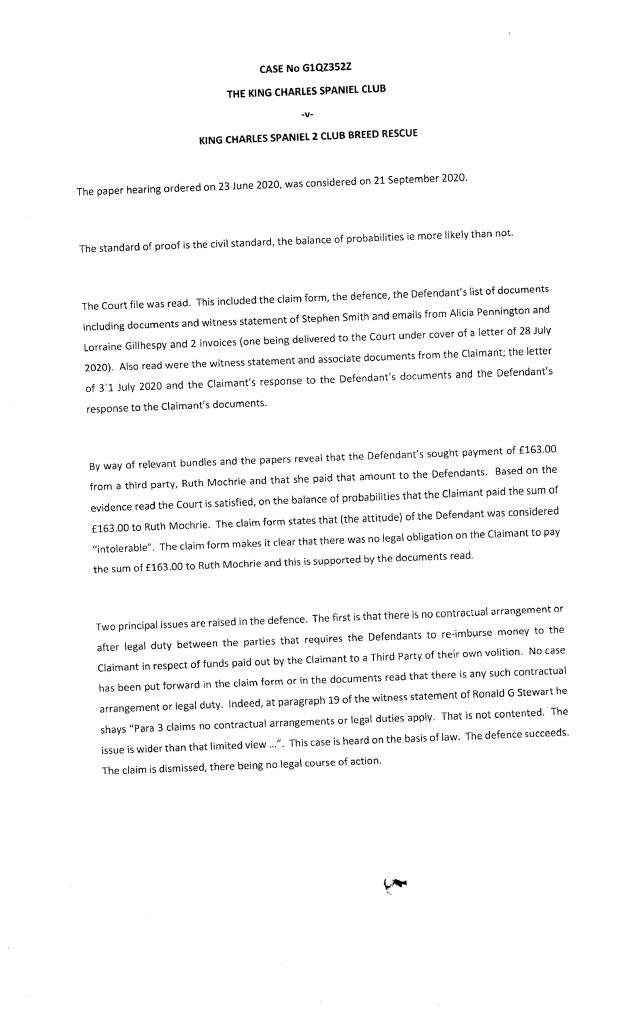 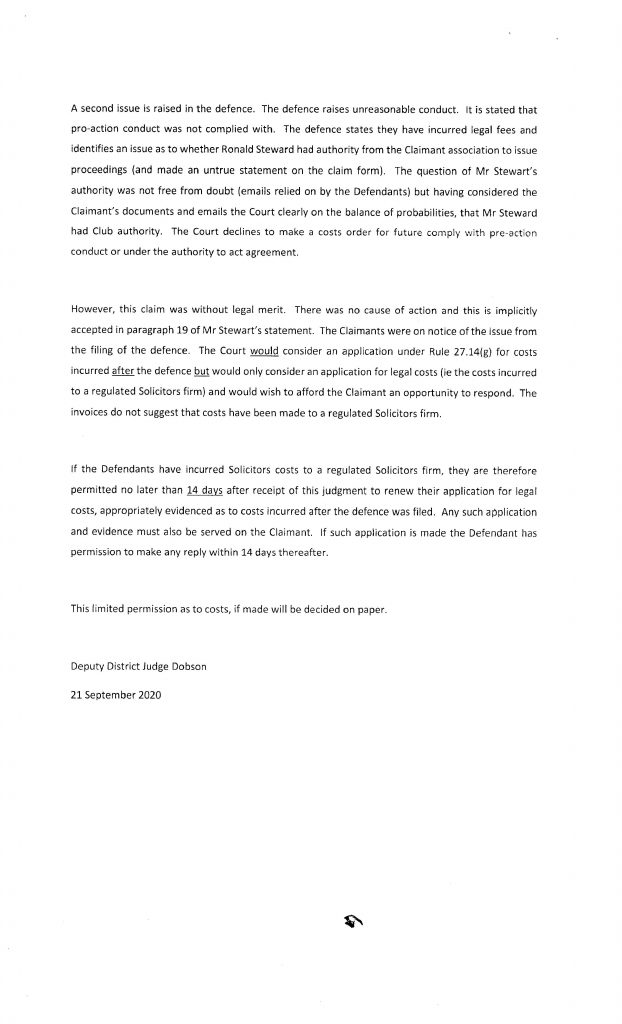 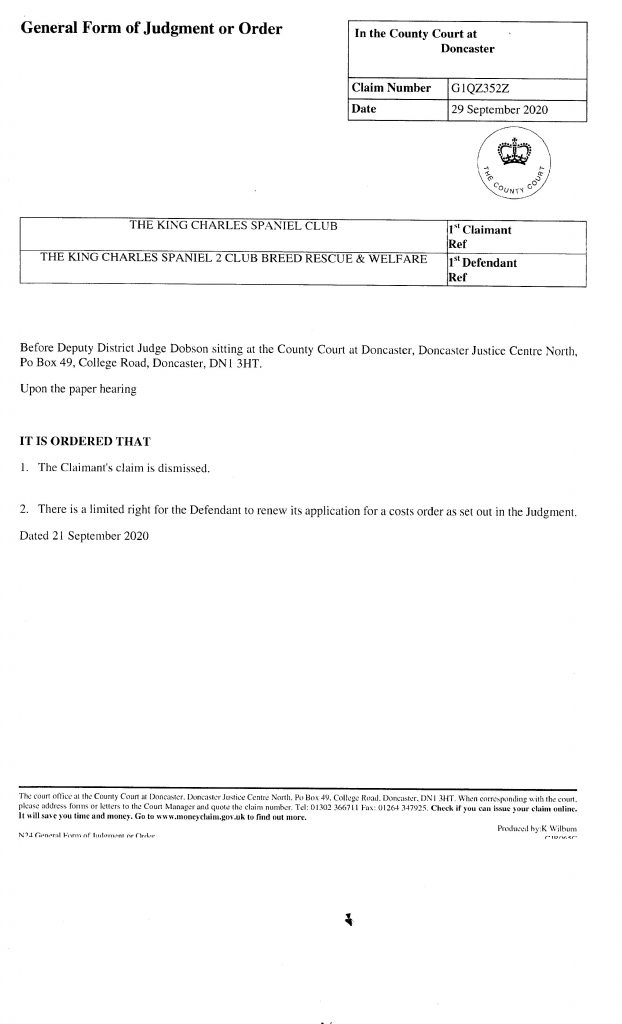 The 2 Breed Club Rescue and Welfare is in disbelief to have received this claim from the Treasurer of the KCSC. Due to the implications and seriousness of this we feel the need to make all members of the NKCSC and KCSA aware. The solicitor, acting on behalf of the rescue in this matter, points out that, in his opinion, an act of perjury has been committed. Please feel free to comment or ask any questions you may have to Raoul Smith, Secretary at raoulsmith89@yahoo.com. 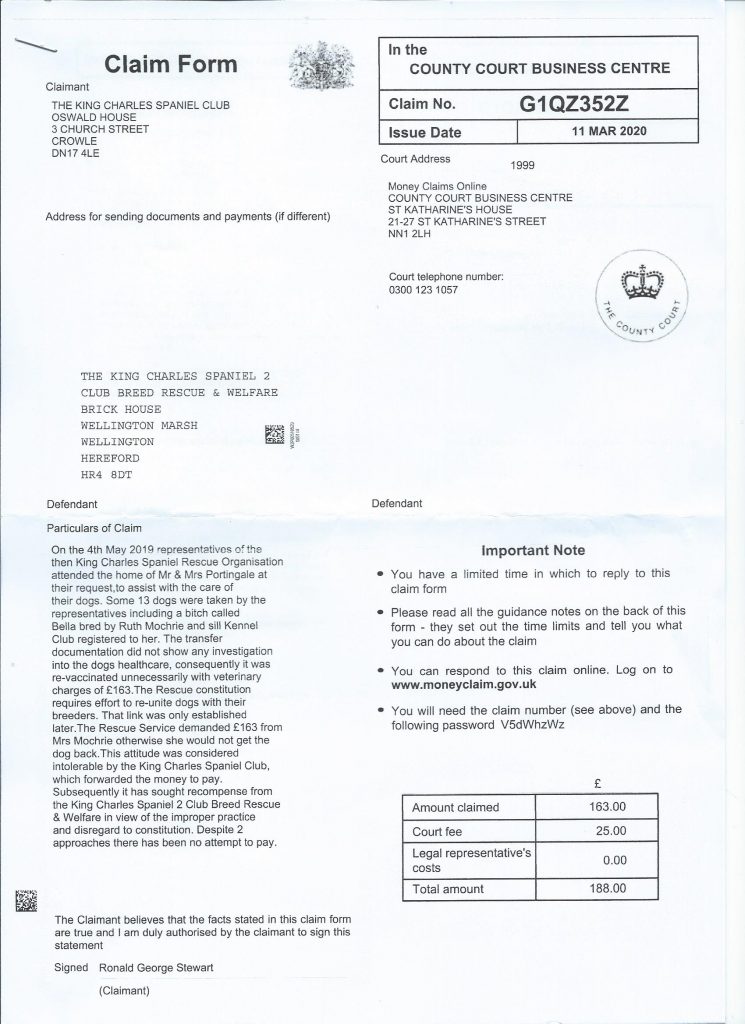 It is our intention to clarify points raised in a) Facebook post by Margaret Mallows [MM] dated 12th August 2019, b) Statement by MM on KCSC website under ‘Secretary’s Notice Board’.

In the latter statement MM states:

“As the situation is ongoing………..no further discussion on social media.”

The matter will be presented in full at the next King Charles Spaniel Club AGM.”

We feel that this matter needs to be dealt with before the 2020 AGM.

Paragraph 1 Line 2 The legacy was bestowed for ‘Rescue’, not education.

Paragraph 2, line 2. They do not want to be involved, but at the time they were part of the 3 Breed Club Rescue[3BCR], we were awaiting the KCSC to appoint a new co-ordinator.

Your appointed Co-Ordinator Lorraine Gilhespy, after attending our committee meeting, reported fully back to the KCSC, including financial statements et al. MM then states it is attributable to the king Charles Breed Rescue (Three breed club rescue). Which is a contradiction of the previous statement, you cannot be attributable then state you are part of the 3-breed rescue!

They state they had no input, but clearly [as above] MM includes themselves in the title q.v.

Statement by MM on KCSC website under ‘Secretary’s Notice Board’.

Paragraph 1. Could you explain why it has taken since 2017 when you received the legacy to formulate a constitution, the 3BCR had their constitution a little while after they grouped; and it has been published in the KCSA & KCSC yearbook?

Line 5 Pam Healey-Gates had updated the KCSC committee of the 3BCR.

Line 10, “no document has been seen that uses the title ‘three breed rescue’. As stated above the title has appeared in the KCSC & KCSA year books. And has appeared on correspondence to the secretary of the KCSC.

Line 11 “In the Kennel club 2018………and Re-homing. this is correct, the KC Rescue dept were informed of the 3BCR & they have omitted in their document as we know mistakes can happen.

Paragraph 4 “1) the constitution of the …….was in credit.” We were in credit at the time of the rescue, but once we had the dogs relinquished by the owner(s) we then accrued significant costs and if we had not received donations from kind benefactors, we would not of been able to complete the necessary veterinary care as advised by the vets.

Paragraph 4 line 4 “Breed Rescue had not disclosed…..adopting rescue dogs. Lorraine Gilhespy [LG] attended our committee meeting as KCSC Co-Ordinator 12/6/19 and was given an audited account of funds, which she said would be presented at your committee meeting on 10th August 2019, along with responses to questions raised by Ron Stewart [RST], which were answered by Raoul Smith [RS] at the KCSC 2019 AGM.

Line 5 “The breed Rescue …… in this case. We had asked for help from the KCSC Rescue legacy, to enable us to have a working balance, should a similar rescue or rescue(s) happen at the same time.

Paragraph 5 ”2) there is evidence of numerous….legal validity. Could you please clarify who your solicitor is so that we may contact them with reference to your claim? The paperwork is the general format of all Canine rescue organisations.

Line 3 at the time of the rescue you were part of it q.v.

Paragraph 6. An example   had been delivered” this statement is incorrect. The Co-Ordinator was furnished with dog’s names & microchip numbers from the owner(s) and had to rely on this, because no vaccination cards were handed to the co-ordinator at the time.

Paragraph 7 see above qv. All treatment was necessary, we were guided by the vets. In the Two Breed Rescue [2BR], constitution and as is protocol in other canine rescues. Breeders who have their dogs returned to them do not have expenses paid by rescue. By reimbursing the breeder, you have set a dangerous precedent. In the futur a breeder may have an unwell dog, gives this to a friend, who in turn contacts rescue, they pay any expenses & the dog is then returned to the breeder. You also forget that said breeder now has a bitch that should they wish could be bred from or sold. This is not the ethos of the 2BR. It is heartening that another breeder has principles & declined reimbursement.

The relinquishers contacted 3BCR requesting that they took their dogs, save the RSPCA who would not have referred dogs to rescue. At all times all co-ordinators were helpful & showed a duty of care; you must remember it was not just King Charles Spaniels that were relinquished, two other breeds & felines.
Advice was also given to the relinquishers which they followed ie they were informed that it would be wise to relinquish all dogs, due to RSPCA protocols, but they insisted on keeping two. And later that day [ of the recue] they made contact & requested collection of said dogs, including two KCS/Cavalier King Charles Spaniel cross puppies. The latter over eight weeks of age unvaccinated or microchipped.

Also the breeder who had been re-imbursed when hearing that we had a dog of theirs, never contacted  RS and offer to collect dog, nor since the dog has been with breeder, has never let RS know it’s progress, whereas the breeder who declined re-imbursement, contacted me immediately and paid all vet care immediately and has since kept RS up to date[on a weekly basis] with the welfare & progress of their dog and has sent numerous photos.

The relinquisher had been contacted by mail, but has failed to reply; also, they have never asked the two co-ordinators that were caring for their dogs on the wellbeing etc of those dogs.

Paragraph 9 “6) while confidentiality…. their intentions” at the time the KCSC had not appointed a co-ordinator, so how could we involve the KCSC?

Line 3 “…the motives of the Breed rescue, have come under suspicion, regardless of their intentions” The only priority was to rescue the dogs from an appalling lack of care, as noted by the RSPCA. Our ethos is ‘Welfare of the breed’ and no other intentions. We find this a defamatory statement.

Whilst you stae about confidentiality, at no time have the co-ordinators revealed any personal details of the relinquishers & RS when writing to one breeder had his emails copied into some of the KCSC committee & the relinquisher had also gone public.

Paragraph 10. “As the rescue……on social media. As stated, qv “We feel that this matter needs to be dealt with before the 2020 AGM.

Closing statement, why has this edict been published by the KCSC secretary & not the rescue secretary?

This is our final comment on the rescue, because four co-ordinators have been approached by the RSPCA to make statements, and we do not wish to prejudice any action they deem necessary.